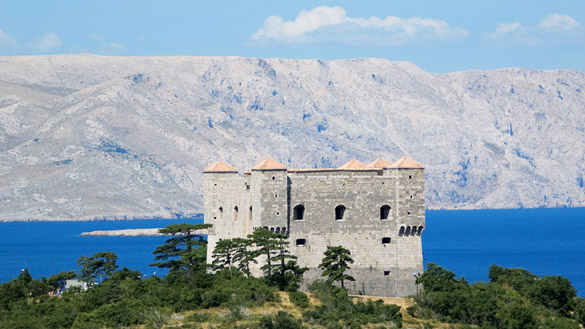 Fortress Nehaj was erected in 1558 when the Turks and Venice were at the peak of their power. In those bitter times Senj with its inhabitants resisted numerous attacks of the enemy trying to seize control over the town.

Zavratnica is certainly one of the most beautiful bays of the Croatian coast. Looks like a miniature Norwegian fjords. It is only a 15 minute walk along the coast from Jablanac. Until it can be reached from the village Zavratnica, descending from a lookout point sandy path to the bay.

A large number of attractive sights are concentrated in this predominantly mountainous park – magnificent carst forms of Hajdučki and Rožanski kukovi, unique botanical garden and Lukina cave, one of the longest in the world.

The Cathedral of the Virgin Mary built in the Romanesque style, probably dates from the eleventh or twelveth century. Around the cathedral, i.e. in front of the portal and on the backside of the apse, the paleo-Christian tombs, mosaics, and ceramics were found.

The Uskoks were the ancestors of the Herzegovian mountainous people and the rebelious and warlike Dalmatas whowere fleeing from the Osmanlie and found the shelter in Klis. After the fall of Klis to the Osmanlie in 1537, the majority of the Uskoks settled down in Senj and its surroundings

BEACHES IN THE AREA OF SENJ

The Town of Senj and its surroundings are the ideal destination for biking activities throughout the year, due to its climate and terrain configuration. Only few kilometres take you from the crystal blue sea and mild Mediterranean climate to mountain pastures where the intact nature and clean air freshen your body and soul.

Premužić trail -The top parts of northern and central Velebit from Zavižan to Baške Oštarije are connected by a 57 km long hiking trail. It was named after its designer, Ante Premužić, the great builder of roads and trails on Velebit.
The trail opened access to the least to the most hidden and the most beautiful parts of Velebit, known only to few people that far.

Since medieval times, the East coast of Adriatic sea has been the main shipping route from the East to the West. Today, there are numerous ancient remains either on land or on the sea bottom, which help us to follow those shipping routes and recall the events from our past. On the bottom of the sea, there are numerous shipwrecks scattered around – a graveyard of ships caught in a storm or perhaps shot by a cannon ball, beauties that never reached their destinations.